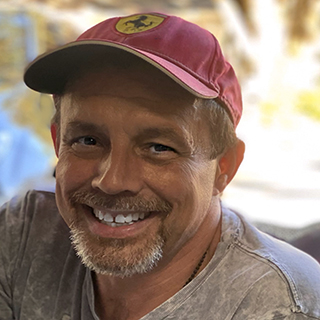 Robert, a self-taught artist was born in 1969 in LaSalle, Quebec, Canada. Robert took to art as soon as he was able to hold a crayon, often doodling or drawing for hours. Throughout his childhood, he developed an appreciation for artistic expression and creativity, whether it was building with Lego Blocks, a bird house out of scrap wood, making contraptions with Erector Sets, designing Halloween costumes, or just drawing pictures. But it wasn’t until much later in adult life during a chance encounter that the artistic spark would be ignited.

Robert is now a professional artist full-time running Tampa Murals, INC and Tampa Mural Painter.  Along with larger and larger projects the company has started to grow employing more artists and has expanded their reach to all corners of Florida.  He lives in Riverview with his family who are also beginning to show signs of the artistic spark. Robert’s extensive mural art can be seen throughout Tampa Bay and central Florida.